The band played, the breeze blew, the time capsule gleamed, deans spoke, and nearly 350 College of Engineering alumni from five decades mingled, caught up, and reminisced. The college’s 50th Anniversary celebration was a rousing success, with happy alumni, faculty, administrators and staff packing the open-air courtyard at the Engineering Sciences building. We spoke with several alumni at the event, whose varied lives and experiences reflect the diversity of the CoE.

Iraj Rahmim (Chemical Engineering, 1985) earned his bachelor’s and master’s degrees at UCSB and his PhD at Columbia. He worked for Mobil out of school but felt constrained in a large corporation, so seventeen years ago, he started his own consulting firm. His clients include people trying to develop new technical ideas for market, and large companies that may be developing new facilities or plans. “One thing we’re working on involves taking carbon dioxide and reconverting it back to clean fuels — sort of making the chemistry backwards,” he says.

It took him a while to identify his own entrepreneurial inclination. “I was too young when I was here as a student to know what I wanted. All I knew was that I loved science, I loved engineering, I loved chemical engineering, and I wanted to do something in it.”

After twenty years away from California, he and his wife moved back last year, “just in time for the 50th anniversary.” He said of returning to UCSB: “It’s really, really good to be back. I feel like I want to be twenty years old and go back to school again. I’m completely envious of the people who live here and go to school here. It’s such a lovely place to be. The other thing I’m reminded of is how amazing and supportive the professors were. I mean, these were brilliant, brilliant professors — Robert Rinker, Duncan Mellichamp, Jack Meyers, Dale Seborg, and many others. They did great research, but they cared about teaching. It’s pretty much the only place I went to school where I felt so supported. As a young person, they were on your side, even though they were very tough. I lucked out big time.”

Bruce Black (BS Mechanical Engineering, 1969) turned 70 a week before the 50th-anniversary celebration. He lives in Los Gatos and retired after selling the company he started and ran for 35 years. Even while he was in school at UCSB, Bruce demonstrated the entrepreneurial spirit that infuses the College of Engineering, earning his way through school by selling sides of beef to students in Isla Vista. “I made five-percent commission convincing people to buy a 300- to 400-pound side of beef. It was butchered in Santa Barbara and they could pick it up every week,” he recalled.

After graduating, Bruce worked on the Apollo program at North American Rockwell in July 1969, the year the Apollo 11 mission culminated with Neil Armstrong’s stepping onto the moon. Bruce remained at Rockwell through the nearly disastrous Apollo 13 mission, which was immortalized in the 1995 film Apollo 13. “I was there for some exciting times,” Bruce said.

In terms of engineering, he recalled, “I didn’t want to be an engineer; I wanted to be a sales engineer.” So one day, he reports, the following occurred: “I was married with a one-and-a-half-year-old child. I came home and told my wife, 'I’m getting ready to lose my job; I think it’s about time we start our own business,’ and she said, ‘Well, we have $1,500 to our name, and I’m pregnant with number two. You have seven months to get this thing running, and if they’re getting ready to repossess our house, you have to get a real job.’”

And so, in 1975, Bruce started a company in Silicon Valley distributing the high-tech pipes, valves, and fittings necessary for moving acids, solvents, and deionized water. Selling primarily to semiconductor fabrication companies, he eventually expanded across five western states to Texas. He sold the company and retired in 2010. Now, he said, “I’m living the good life. I have seven grandkids, the family is doing well, and my golf game is a four or five handicap.”

Linda and Mario Aguilar (both BS, Electrical and Chemical Engineering, 1998) met as undergraduate engineering students and married a couple of years after graduating. Professor Robert Rinker was at their wedding. Today, Linda works in plant management at Koolpak in Oxnard, and Marion is in customer service at Proctor & Gamble. Despite how different their current work is from chemical engineering, they both said that their training paved the way for their success.

“I use all of my education,” Mario said, “the analytical thinking, defining a problem, figuring out the possible solutions. That’s all we do. It’s all the critical thinking.”

“As an engineering student, you develop skills you need to do anything else,” Linda said. “It’s all about solving problems, and that’s what we’re set up to do successfully.” She might come to work and have to address any number of problems — machines that aren’t performing optimally, missing employees and how to make up for them to maintain throughput. “There is a huge variety of day-to-day change, and you have to be able to step back and analyze the situation and prioritize actions and align resources to address that.”

Tom Stockton (Computer Science, BS, MS, 1967) graduated from UCSB and was soon involved with the Hughes Glomar Explorer project. The deep-sea drillship platform was built initially for the CIA’s Special Activities Division secret operation called Project Azorian, which aimed to recover the sunken Soviet submarine K-129, lost during April 1968 in 15,000 feet of water. “For a young engineer, it was something,” he said. “I felt like I was in the middle of a James Bond novel.” To this day, he is not allowed to say much about the operation.

Later he became involved in the offshore industry, traveling all over the world to work on computer systems that keep drill ships in place so they can drill without anchors. “I couldn’t have done what I’ve done without the education I got here,” he said, adding, “It’s really interesting; if you major in liberal arts and become a building contractor, the degree doesn’t matter so much. But to be an engineer, you need that engineering degree. The teaching component is so important. It’s amazing what the school has become.”

Michael Lovette (PhD, Chemical Engineering, 2011) earned his PhD in Professor Mike Doherty’s lab, moved to Indiana, where he spent four years working at Eli Lilly, and then returned to Southern California in 2015 to work for Amgen in Thousand Oaks. He leads Amgen’s group that designs crystallization processes for small-molecule therapies, medicines that are on their way through clinical trials and are very likely to be launched. Crystallization is one of last steps in creating a new drug and involves removing any impurities to isolate just the drug, which is then processed into a tablet.

Michael returns to the College of Engineering a couple of times every year for the Graduate Student Symposium and the senior design competition. “There’s a real family feel to the department,” he said. “It was a great environment to be in, with world-class people, and everyone was willing to help. If I had a question, there was always an expert in that area who I could talk to, and nobody ever said no. There were open doors; you just knocked and walked in, and you could have a half-hour conversation. It helped me to put together all the different pieces to solve my problem.”

Befitting an Amgen employee, Michael is a dedicated cyclist who, at the time of the anniversary event, was looking forward to joining other amateur riders on a 100-mile-plus segment of the 2017 Amgen Tour de California. 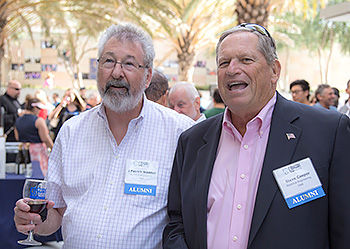 Patrick Waddell (BS, Electrical Engineering, 1969) is retired and living in Silicon Valley. Pat says he “was involved in computer architecture at a point in time when computer architecture was serious business, because computers were big.” He worked for two computer companies that no longer exist, then “got pulled off to do television” and has spent that past twenty years doing broadcast engineering, along the way aggregating about a dozen technical Emmies shared with his colleagues who do standards work.

He arrived at UCSB in fall 1965, when “Engineering had just ‘squatted’ on top of the Art Department.” He recalls with a laugh the art students’ making their displeasure with the situation clear in not-so-subtle signs in bathrooms and comments in the hall, most of which, Pat recalled, amounted essentially to “Engineers, go home.”

This was Pat’s second visit to UCSB in the past twenty years, since a celebration for the late UCSB professor Glen Culler, a pioneer in digital information and a key architect of the internet, who died in 2003. “The young people who are students here now need to understand that they are following in the footsteps of some real giants, folks like Glen Culler,” he said.

Christina Borghese (BS Chemical Engineering, 2005) co-owns a chemical engineering company for entrepreneurs. “We scale and commercialize first-of-their-kind technologies,” she said. One example is extracting lithium from various brine sources in the U.S. to create a domestic supply of lithium, an important product most of which currently comes from Chile and Argentina. She owns the company with another UCSB alumnus from 1986. “I bring the youthful enthusiasm and he brings the gray-haired experience,” she quipped.

Christina was involved with the Technology Management Program while at UCSB. After graduating, she spent two years at Clorox, where she “got a good base of experience in technology.” She then worked with a business partner on her first startup, commercializing the world’s first super-critical bio-diesel reactor, an effort that earned them a World Economic Forum award.

“One of the best parts of UCSB is that it has the technical know-how and horsepower, combined with the creativity and inspiration from the environment.”

Thank you to everyone who celebrated our 50th Anniversary with us! There is still time to contribute a part of your own history to our Time Capsule. Contact Michelle Mak via mmak@engineering.ucsb.edu by  June 16 to include your item.