Last month Craig Hawker, professor in the Materials Department at the UCSB College of Engineering and the Department of Chemistry and Biochemistry in the College of Letters and Science, was awarded the Charles G. Overberger International Prize by the American Chemical Society for Excellence in Polymer Research. The award is given every two years.

Charles Overberger was a pioneer in the field of macromolecular science, laying the foundation for modern polymer chemistry through groundbreaking work at the University of Michigan. Professor Hawker has been described as “the world’s foremost exponent of combining organic chemistry and polymer synthesis to create innovative materials having new properties and applications” and as someone who “has inspired a generation of scientists to develop transformative synthetic approaches to functional materials by breaking down the barrier between organic chemistry and material synthesis.”

“I am delighted to congratulate Professor Craig Hawker for receiving the prestigious Overberger Prize from the American Chemical Society,” said Rod Alferness, dean of the UCSB College of Engineering. “Craig is a brilliant and creative scientist who exemplifies the collaborative spirit that we value so highly at UC Santa Barbara. His contributions have significantly advanced polymer science, and he has served as a powerful mentor to many grateful alumni.” 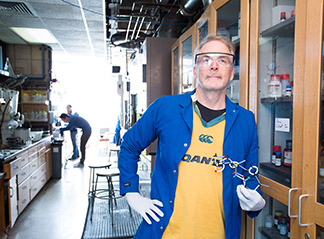 “It is a thrill and honor to receive the Overberger International Prize” states Hawker (right). “He was an early giant in organic polymers who helped establish the field as a major subdiscipline in chemistry and materials. To be even mentioned in the same breath as Professor Overberger and the prior winners of this award is very special.”

Hawker’s innovative applications of fundamental organic chemistry concepts opened the field of macromolecular engineering, allowing researchers unprecedented control over polymer composition, structure, and topology. Later, he took on one of the foundational challenges of polymer science, which was to develop a living free radical polymerization process, opening up previously unexplored areas of polymer chemistry. Hawker’s group was instrumental in realizing that free-radical initiators could be attached to surfaces, leading to the controlled synthesis of polymer “brushes,” now a major theme in materials science.

He has also made large contributions to the rapidly expanding field of “click” chemistry, which is based on mimicking the synthetic efficiency and orthogonality found in enzymes and other natural systems. The impact of this concept is seen in Hawker’s work on preparing multi-functional and multi-valent nanoparticles for diagnosing and treating cardiovascular disease. Ian Manners, a professor of chemistry at the University of Bristol, in England, described that success as a “rare achievement of translating a highly functional polymer molecule from the laboratory to the clinic.”

In addition to advancing fundamental polymer and materials science, Hawker’s ground-breaking studies have contributed to technological and practical applications, forming the basis for more than fifty valuable patents and commercial products. That commercial success is matched by an outstanding citation record (h-index = 130) that firmly establishes the world-wide importance of the synthetic strategies developed in Hawker’s highly collaborative UCSB lab. 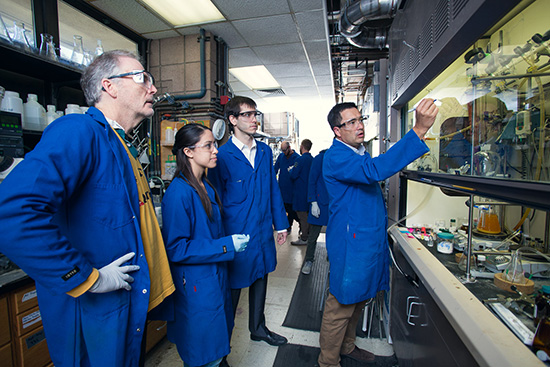 Hawker said that collaboration lies at the root of his success. “That’s what has enabled an award like this — being able to work not only with great students who are attracted to this combination of fundamental and applied research, but also with other UCSB research groups that complement and significantly expand our core competency in polymer synthesis,” he said. “One of the things I’m proudest of is that if you ask people beyond our campus what they think of when they think of UCSB, it’s collaborative research.

Among his collaborators have been many students, whom Hawker described as “our ultimate product,” adding, “The College of Engineering puts tremendous effort into creating an environment that allows them to shine and then go out and do great work. For them to look back and say, ‘I want to thank you for allowing me to shine’ — it’s better than anything.”

Hawker is a fellow of the Royal Society, Director of the Dow Materials Institute and the California NanoSystems Institute, and a member of the National Academy of Inventors.