For the past several years, UC Santa Barbara chemical engineer Michelle O’Malley has focused her research on the powerful anaerobic fungi found in the guts of herbivores, which make it possible for those animals to fuel themselves with sugars and starches extracted from fibrous plants. O’Malley’s work, reflected in multiple research awards and journal articles, has focused on how these powerful fungi might be used to extract value-added products from the nonedible parts of plants — roots, stems, and leaves — that are generally considered waste products. 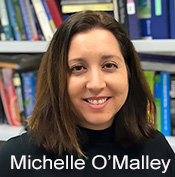 Now, her lab has discovered that those same fungi likely produce novel “natural products,” which could function as antibiotics or other compounds of use for biotechnology. The research is described in a paper titled “Anaerobic gut fungi are an untapped reservoir of natural products,” published May 4 in the Proceedings of the National Academy of Sciences (PNAS).

All living things are equipped with natural defenses to ensure their survival. Microbes often depend on natural products they synthesize that act as defenses against environmental threats and allow them to compete with other microbes. Many such natural products have served as the sourceof antibiotics used to fight disease in humans.

Anaerobic fungi, by definition, do not use oxygen to fuel their production of natural products. Thus, says O’Malley, “It costs them a lot more metabolically to make something than it does an aerobe.” Following from that, anything an anaerobic microbe produces has to be carefully “designed” and extremely efficient, since energy is scarce in the oxygen-free microbes.

In 2017, O’Malley’s lab provided the U.S. Department of Energy with several anaerobic gut fungi, which were then sequenced as part of a larger collaboration. As that work began, O’Malley says, “We started seeing something we didn’t expect to find: the building blocks — biosynthetic gene clusters, or BGCs — that antibiotics are typically built from. BGCs sit near each other on the genome and participate in stepwise chemical reactions. In this case, they are loading a molecule onto an enzyme— chemically decorating it, if you will — and then passing it to another enzymatic module and, in this way, making it into an increasingly complex molecule.”

That molecular assembly-line process is important, she says, because it emulates how antibiotics are often made. She adds, “BGCs could also be useful for making value-added chemicals, because they have lot of complex chemistry built in. So, they might be able to be used as drop-in biofuels, as coatings, and as monomers to make novel materials.”

But the most important implications, she says, are the antibiotic possibilities. In the paper, lead author Candice Swift, who earned her PhD in O’Malley’s lab and is now a postdoctoral researcher at the University of South Carolina’s School of Public Health, demonstrates not only that the BGCs are present where they were not expected to be — anaerobic fungi have never been thought to have antibiotic properties — but, even more surprisingly, O’Malley says, “They are active and are actually making something; they are transcribed.”

Swift’s analysis suggests that the compounds they found have not been identified previously. “We discovered them, and, based on what is known about these biosynthetic gene clusters, they could be making novel antibiotics,” O’Malley says. “We haven’t shown that definitively here, but it’s one possibility that would make sense, because the fungi exist as kind of minority players in their community, so they probably have some edge or ability that allows them to stick around in the face of overwhelming competition. That’s what we think they might be doing. We haven’t proven it, but it’s an attractive way to look at it.”

So, if the anaerobic fungi are producing natural antibiotics, how difficult would it be to translate them into use in humans? “If you identify a novel antibiotic, the key to making that at scale is knowing how it’s built,” O’Malley says. “That’s a big question. We’ll try to address that in a follow-up paper, but if you can figure out the genetic recipe for how they’re made, it’s straightforward to apply it in another system.”

She explains that the scientific community “has become pretty good at making antibiotics, recombinantly or through genetic engineering,” and that all, or nearly all antibiotics are derived from natural products — either made in nature or inspired by the compounds that nature builds.

The next stage in this research will be to use genetic tools to boost production and isolate the compounds to figure out exactly what compounds are being made. For that work, she is partnering with other researchers in the BioPolymers, Automated Cellular Infrastructure, Flow, and Integrated Chemistry Materials Innovation Platform (BioPACIFIC MIP), which the National Science Foundation funded last year as a collaboration between UCSB and UCLA.