John Harter, an assistant professor of materials at UC Santa Barbara, has received an Early CAREER award from the National Science Foundation (NSF), the highest honor given by the foundation to junior faculty. Harter will receive more than $715,000 over five years in support of his cutting-edge research in quantum materials science and educational activities. He is the eleventh junior faculty member from the College of Engineering (COE) to receive the prestigious NSF award since April 2020, and the third assistant professor from the Materials Department to obtain the recognition in the past nine months.

“Professor John Harter is pursuing leading-edge research that could fast track the development of quantum technologies,” said Tresa Pollock, interim dean of COE and the Alcoa Distinguished Professor of Materials. “We offer him our sincerest congratulations and believe that his work reflects the intellectual diversity and broad-ranging impact of the research being pursued by our faculty.”

“Earning a CAREER award is a great honor, and it means that the NSF believes that there is value in the research that my group conducts,” said Harter, who joined the Materials Department in 2017 after earning a PhD in physics from Cornell University. “The award is substantial and will support a dedicated PhD student to work on the project, along with necessary supplies and recharge fees for shared facilities, over the course of five years. Such long-term guaranteed support will help my group push the field of unconventional superconductivity into exciting new directions.”

Superconductivity is a phase of matter that emerges when a metal, such as mercury or lead, is cooled to sufficiently low temperatures. At that point, the material loses all electrical resistance and does not allow magnetic fields to penetrate, meaning an electric current can persist indefinitely in the material. Microscopically, superconductivity results from the pairing of electrons that orbit each other, and material scientists classify different types of superconductivity by the shapes of these orbits. Typically, their mutual orbital motion is symmetric, meaning that if space is inverted or the pair is turned inside out, the orbit would look exactly the same, a characteristic of inversion symmetry called even parity. Harter will conduct experimental research on a special type of superconductivity called odd-parity superconductivity, which results from pairs of electrons whose orbits reverse their direction when space is inverted. The spontaneous breaking of inversion symmetry by the electron pairs leads to intriguing properties not found in more conventional types of superconductivity.

“Odd-parity superconductors are rare and interesting, because they are expected to exhibit many exotic properties,” explains Harter. “Perhaps the most exciting prospect of odd-parity superconductivity is the possibility of finding a so-called ‘topological’ superconducting phase, which is an even rarer distinction related to how the pairs of electrons can become entangled with each other within the superconductor.”

Due to the quantum entanglement, in which the particles stay connected so that actions performed on one affect the other regardless of the distance between them, topological superconductors are theoretically predicted to be stable against environmental fluctuations and have applications in future quantum-information technologies, namely in the construction of a topological quantum computer that is naturally immune to decoherence. Overcoming decoherence, which is the loss of quantum properties caused by ‘noise’ or environmental conditions, is currently the main obstacle to building a functioning, scalable quantum computer.  Harter says that topological superconductors may be the “secret ingredient” that scientists have been searching for to solve the hard problem of decoherence.

“Just as the advent of the computer age is strongly tied to the harnessing of silicon to build solid-state transistor circuitry, the development of quantum computers will likewise require a robust material platform that can overcome quantum decoherence,” said Harter. “Odd-parity superconductors may be the key to achieving this goal.”

To discover new odd-parity superconductors, Harter’s research group will take inspiration from recent theoretical developments that revealed a connection between odd-parity superconductivity and materials that have both strong spin-orbit coupling and fluctuations of an auxiliary polar order. Spin-orbit coupling is a relativistic effect that occurs when an electron approaches the speed of light as it orbits an atomic nucleus. When that happens, the spin of the electron becomes correlated with its orbital motion. Polar order is any distortion of a material, such as a displacement of the atoms within the crystalline unit away from their equilibrium positions, that violates spatial inversion symmetry, so that one direction in the crystal becomes distinct from the opposite direction.

“What the theoretical models have shown is that if we can find a material that combines these two key ingredients — spin-orbit coupling and polar order — electrons are able to orbit each other in exactly the right way to form odd-parity superconducting pairs,” he said.

Harter’s group will first identify superconductors having strong spin-orbit coupling and polar order by using a specialized laser, where all of the energy of the laser beam is packed into extremely short pulses of light. They will use the laser to measure a material’s second-harmonic generation, which occurs when light is shined on a material and the frequency of a small component of the reflected light is doubled. Typically, light reflected from a material has exactly the same frequency. The frequency can double, however, if a material breaks inversion symmetry and possesses polar order.

“By using this technique, we can map out the magnitude of the polar order in a material candidate,” said Harter. “If that polar order exists in proximity to the superconducting phase, we have a good candidate to continue pursuing.”

Once a superconductor having a polar order has been found, researchers will use two techniques to suppress the polar order. First, they will change the overall concentration of electrons in the material by replacing a fraction of the atoms with other elements that donate or accept electrons, a process known as chemical doping. They will also apply pressure to the material along one or more directions to change its chemical bond lengths and crystal lattice constants.

“These steps will act as tuning knobs, allowing us to adjust the strength of the polar order in the material under study. By adjusting down to zero, we can enhance the fluctuations,” Harter explains.

Once they enhance the polar fluctuations in the material, researchers will study the parity symmetry of the resulting superconducting phase with a combination of conventional techniques, including Raman spectroscopy and nonreciprocal charge transport, as well as the development of novel techniques such as nonlinear terahertz spectroscopy.

Harter will focus initially on three promising material families — doped SrTiO3, the superconducting pyrochlore Cd2Re2O7, and the quasi- and filled-skutterudites.

“Positive results of this CAREER project will confirm longstanding theoretical ideas and may have far-reaching consequences for quantum technology development,” Harter said. “The ultimate goal of my research is to develop new experimental methods to reliably characterize the ground states of unconventional superconductors and other quantum materials. This is an extremely challenging mission that I expect to work on for most of my academic career, but this award will act as a springboard to help my group quickly start making advancements in this area.” 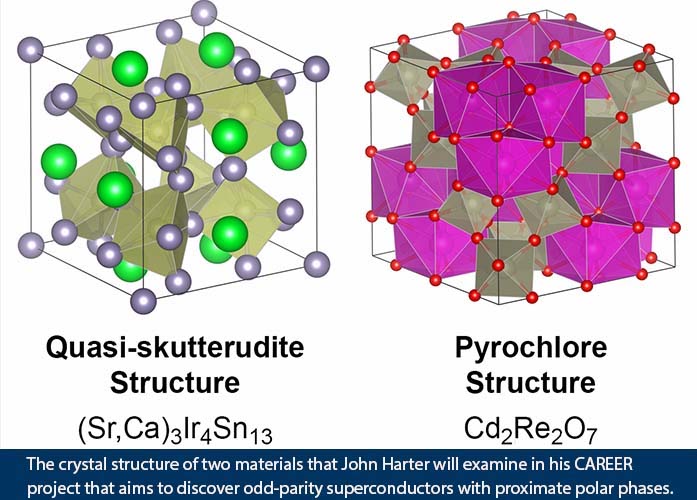