For the first time in three years, UC Santa Barbara’s College of Engineering hosted an in-person Capstone Design Expo. During the June event, fifteen capstone teams presented and demonstrated their final projects, showcasing their creativity and months of hard work. Many of the products were developed in collaboration with industry partners or UCSB research labs.

“This experience will springboard their careers,” said Tyler Susko, an assistant teaching professor and the capstone instructor for the Mechanical Engineering Department. “The capstone course sequence gives students their first experience as principal engineers, working with people from industry, troubleshooting problems, and developing an innovative and novel technology.”

Featuring mechanical engineering, electrical engineering, and art students, FLIR Spyglass received the Best Multidisciplinary Project Award. The team partnered with Teledyne FLIR to build a lightweight, stabilized, mast-mounted camera for boats. Having both visible and infrared capabilities, the novel camera provides skippers with an unobstructed view of the waters ahead, day and night, and is intended to reduce the frequency and severity of boating deaths and accidents. In 2020, more than five thousand boating accidents occurred in the United States, resulting in more than seven hundred deaths, three thousand injuries, and $62 million in property damage. Equipped with two artificial intelligence (AI) circuit boards for image processing and a third board for motor control, the camera detects and displays images based on tiny differences in heat, not light.

“It was an amazing opportunity to collaborate with other students and develop a high-quality product to solve a problem that is affecting people around the world,” said Andrew Larson, a mechanical engineering major. “Along the way, we familiarized ourselves with thermal management, water proofing, and camera design and stabilization to create the most optimal camera system possible.”

Larson said the experience influenced his career path and led him to accept a position as a thermal-mechanical engineer.

Judges selected the Lunar Regolith Excavator (LRE) team for the Most Innovative Award. LRE students developed a low-force excavator capable of mass harvesting the lunar regolith, the soil on the Moon, formed by the impact of meteorites, which includes dust, broken rocks, and other materials. The lunar surface could be instrumental to the future establishment of a permanent human presence on the moon, because it can be processed to extract water for human consumption and crop growth, oxygen to breathe, and construction materials to shield radiation.

SmartO2 received the Most Technical Award. The team collaborated with Laxmi Therapeutic Devices, a Goleta-based startup company, founded by mechanical engineering professor Sumita Pennathur, that is developing a wearable glucose monitoring system to help people living with type 1 diabetes. The condition hinders the body’s ability to produce or use insulin, the hormone that enables cells to use glucose in the blood as an energy source. People must control their blood glucose to keep sugar levels within a healthy range. The team developed an automated testing system to expose Laxmi sensors to different concentrations of glucose and deoxygenate the glucose to a user-input oxygen level. Their technology allowed for increased throughput and more consistent testing of sensors.

GoNut received the Best Pitch Award. The team designed a product to help infants and young children who are suffering from disabilities that make them unable to walk by themselves. They developed the GoNut, a “cause-and-effect vehicle” that helps children with mobility impairment build a connection between pushing buttons and feeling the associated motions, which is beneficial to their therapy processes.

“We’ve had versions that were too big and too heavy,” said Tony Tang, a senior mechanical engineering major. “Each time we encountered a problem we worked together to solve it and improve our product.” 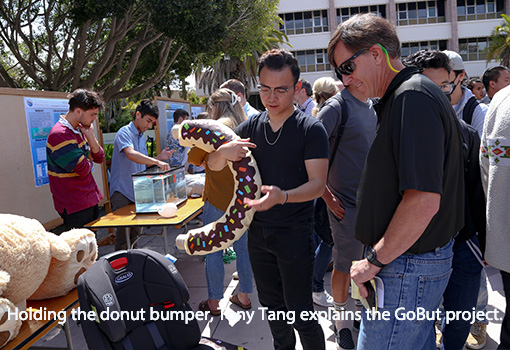 After meeting with physical therapists and observing them work with children, students designed a wheelchair-like vehicle, with a flexible arm for a button panel that children can push to move the vehicle. The panel acts as a remote control, where each button represents a specific movement, such as forward, backward, or to the side. The vehicle is controlled by an electrical unit, which is located underneath the seat, and receives commands over Bluetooth from the wireless button panel. The vehicle includes a built-in bumper that is aesthetically pleasing to children and resembles a donut with chocolate frosting and rainbow sprinkles.

“Capstone was a great experience,” said Tang. “It was amazing to work as a team for several months with other mechanical engineering and art students. We went through so many different versions to design a product that we all are proud of and believe in.” 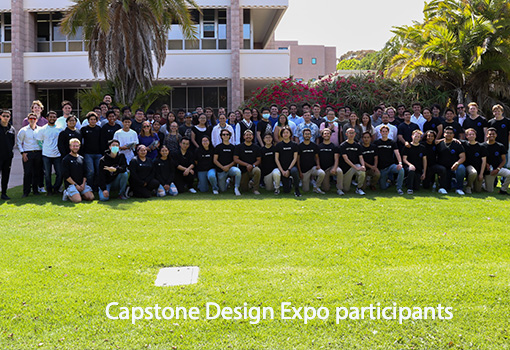