CoE alum Robert Rankin came to UCSB for the waves, then rode a groundswell of success to a big career as a computer programmer.

I graduated from high school in 1970 and was accepted by UCLA but knew I wasn't ready, so I worked for two years before coming to UCSB. Purely by accident, I got a job in 1971 at the Bank of America data processing center in Los Angeles. I was the night-shift computer operator. It was a perfect job for me. I could surf all day and work an easy job at night.

B of A had a giant IBM 360 with millions of blinking lights, rows of tape machines, and rows of 750K-byte disk drives the size of washing machines. It was like a science fiction movie. There was even a card sorting machine. My job was to mount tapes and disks and load trays of punch cards into the card reader. Forty-six years later, I'm still in the computer business.

One of the things I did at the B of A data center was to print pay checks. I saw that computer programmers were paid well and didn't seem to work that hard, so one day I asked my manager what I would need to do to become a computer programmer. He told me to go back to school and get a degree in computer science. So I did, but it took ten years.

When I arrived at UCSB in 1973, the counselors advised me not to get in over my head with science and math classes.  I signed up for geography and took all the computer classes I could find as electives. My first computer course was Engineering 5A, FORTRAN programming, with Professor Roger Wood. I think about Roger all the time, because he is the reason I went on to have a wonderful career. 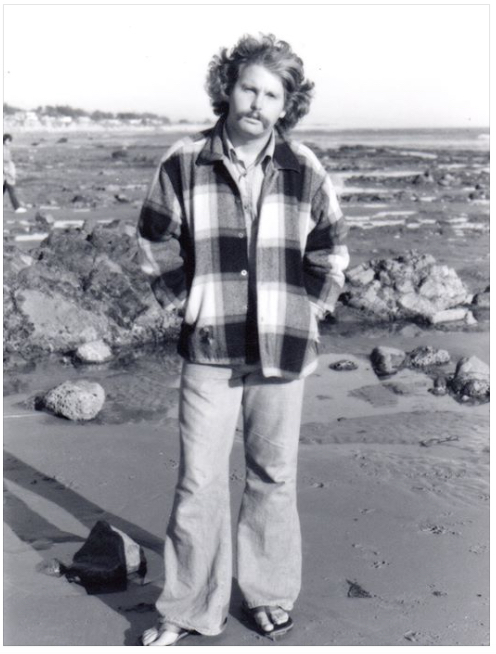 I graduated from UCSB in 1976 with a BA in geography and an unofficial minor in computer programming. But I also had two solid years of experience working with computers, unusual in those days. I saw an ad in the UCSB placement center. Los Padres National Forest headquarters in Goleta was looking for someone to build a management information system for them. At the time, they had no computers.

The hired me, and I founded the first MIS/IT department at a National Forest. I used drafting skills I learned in cartography classes to design a data-center building based it on my recollection of the B of A data center. I bought a brand-new PDP-11/70 computer system. I hired a couple of programmers and a few keypunch operators, and we went to work. I then traveled around to other National Forest offices in California helping them get their information systems started.

After a couple of years managing that small MIS operation I realized it was time for me to get a real education. I was ready for it now, and the Forest Service offered to pay all my expenses, so I applied for a second BS at UCSB, this time in computer science. They don't normally like to take students who are seeking a second BS, but because I came with a letter of recommendation from the Secretary of Agriculture in Washington, D.C., they took me back.

When I finished my courses, I applied for the master’s program in electrical and computer engineering. I received my MS ECE degree in June 1983, ten years after coming to UCSB for the surfing.

By then I was overqualified for counting pine cones on the Forest Service PDP-11. During my last quarter of UCSB grad school, I met a man named Dr. Fletcher Philips, who was Vice President and Director of Engineering for the Santa Barbara Research Center (SBRC), a division of Hughes Aircraft Company located in Goleta. He was looking for new engineers and invited me to play golf with him. He made me an offer on course, so the day after my MS ECE graduation, I resigned from the US Forest Service and went to work as a senior software engineer at SBRC Hughes Aircraft Company.

My job at SBRC was really cool. We actually melted down sand and etched our own integrated circuit chips on sheets of silicon. We had electron microscopes and lasers, we made spy satellites, and we were part of Ronald Reagan's Strategic Defense Initiative, aka STAR WARS. I had a Top Secret clearance.

Then one night I was having dinner at a local restaurant, and Dr. John Bruno, who had been my graduate advisor, walked in with Dr. Alan Konheim, chair of the UCSB Computer Science Department. We started talking. The new quarter was about to begin, a professor, Dr. Robert Kemmerer was out on sabbatical, and they needed a CS instructor right away. That's how I became a computer science instructor at UCSB. 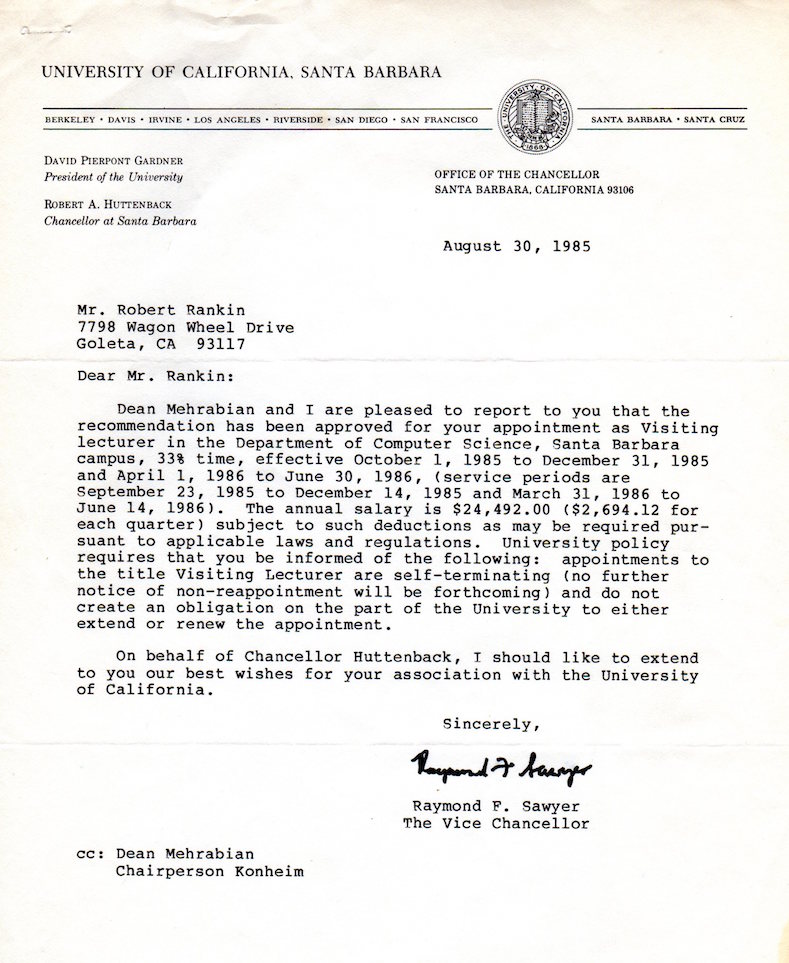 I taught in the CS Department for about three years, and later spent 13 years as a CS professor at De Anza College in Cupertino, where, I figure, I helped about 3,000 students launch CS/MIS/IT careers. Nothing feels better than when a stranger walks up to you and thanks you for your part in their career.

Eventually, I met some people from Apple when they came to visit SBRC. The next thing I knew, Apple Computer, which gets 1,000 resumes for every opening every day, was recruiting me. And that’s how I, a surfer from Santa Barbara, became a senior engineer at Apple Computer, and part of a team that literally changed the world. I was the first person to create a network of little computers that were hooked to a mainframe in another part of the world. I was on the team that invented network printing. I wrote parts of the OS. I worked in the same building with Steve Jobs.

Now I'm 64, and I'm trying to figure out an iPhone app that will make me a millionaire. I've had a wonderful career, and I've given back by teaching for over 15 years. And all of what I’ve accomplished is thanks to the Computer Science Department in the UCSB College of Engineering.