Landslides are one striking example of erosion, resulting when the bonds that hold particles of dirt and rock together are overwhelmed by a force — often in the form of water — sufficient to pull the rock and soil apart and break the bonds with other rock and soil that hold them in place. Another type of erosion involves using a small air jet to remove dust from a surface. In that instance, erosion occurs when the force of the turbulent air is strong enough to break the bonds that hold the individual dust particles, or grains, together and cause them to stick to the surface. In the pharmaceutical industry, cohesion/erosion dynamics are immensely important in successfully processing powders to make medicines. Erosion dynamics also play an important role in another, rather far-removed, example, that is, landing a spacecraft on a surface, such as the Moon. As the spacecraft lowers, the exhaust of its engines causes the granular material on the surface to erode and be transported. The displaced material forms a crater, which must be of the correct dimensions; too narrow or deep, and it will cause the spacecraft to tip over.

We often encounter divided materials that are composed of small particles, such as sand on the beach, as well as soil, snow, and dust. Such particles can be affected by more than just frictional forces, sharing some additional cohesive forces with their neighbors. While cohesion acts only between a particle and its immediate neighbors, it also produces macroscopic effects, for instance, causing divided bits of material to aggregate and adding additional strength to the composite. Cohesion is what causes powders, such as flour, to clump and enables us to make castles on the beach by adding a small amount of water to dry sand.

In the presence of external forces, such as from wind or water, the cohesion between particles can be overcome. The onset of erosion refers to the point at which the drag force, exerted by fluid or air, causes particles to lose contact with the granular bed, becoming separated both from each other as neighbors and to the surface to which they adhere. This captures our fairly elementary current understanding of erosion: if local external forces on a particle are larger than the forces keeping it in place, it erodes, another way of saying that it is displaced.

As fluids or air apply larger stresses, such as when they move fast enough to become turbulent flows, they can cause greater erosion. An exceedingly broad range of turbulent-flow configurations acting on an equally broad range of materials lead to the erosion we see, at the macro level, in the forms of enormous canyons, worn down over eons by turbulent rivers, and gigantic sand dunes, shaped by turbulent air currents. Surprisingly, given that erosion drives the sediment cycle and constantly reshapes the surface of the Earth, the current understanding of erosional forces is not adequate to explain the rich variety of resulting landforms.

Alban Sauret, associate professor in the UC Santa Barbara Mechanical Engineering Department, is keenly interested in these processes, and in research published in the July issue of the journal Physical Review Fluids, his group, including first-year PhD student Ram Sharma, and colleagues in France, present new research examining how cohesion between particles can influence the onset of erosion. By using a recently developed technique that allows them to control the cohesion between model grains and then running experiments in which they use a jet of air to displace the grains, they were able to gain a much better understanding of cohesion, which holds particles together; erosion, which causes them to separate; and transport, which involves how far the displaced particles then travel.

The research offers an approach for quantifying how the magnitude of cohesion changes the amount of local stress needed to start erosion. Besides using this understanding in civil engineering, say, to measure the strength and stability of soil in an area where construction is planned, the researchers hope that their model will provide empirical evidence for a physical theory of erosion that includes cohesion and relevant to the broad range of applications, mentioned above, ranging from removing dust from solar panels — important, given that dust can reduce energy production by twenty to forty percent — to landing rockets on other planets.

Since most erodible material we encounter is cohesive, and turbulent flows account for many of the mechanisms that cause erosion, when we speak of erosion generally, we are often talking about erosion of cohesive particles in turbulent flows.

While erosion of non-cohesive grains can be predicted satisfactorily, the interplay between turbulent flows and erosion in the presence of inter-particle cohesion has not been well researched. But it deserves study, Sauret says, because “Cohesion is everywhere! If you are modeling something as simple as how to clean a surface, for instance, and your model does not correctly account for cohesion, you will likely end up taking a wrong approach. — and still have a dirty surface.”

One example of a highly complex everyday system that seems as pedestrian as it can be,is when we use the kitchen-sink faucet or a tool that shoots a jet of water to remove a sticky bit of food from a plate. The complexity arises from its being a “three-phase” system involving the interplay of turbulent water, air, and solids. A simpler, two-phase example might be using a leaf-blowing machine to clean fallen leaves, which involves only air and particles (the leaves).

The technique that the researchers used to control the cohesion between particles involved applying a polymer coating to identical glass spheres (the analog for particles) having a diameter of .8 millimeter. The thickness of the polymer coating could be increased or decreased precisely to increase or decrease cohesion. The turbulent flow is modeled by a variable jet of air that is aimed at the granular bed. 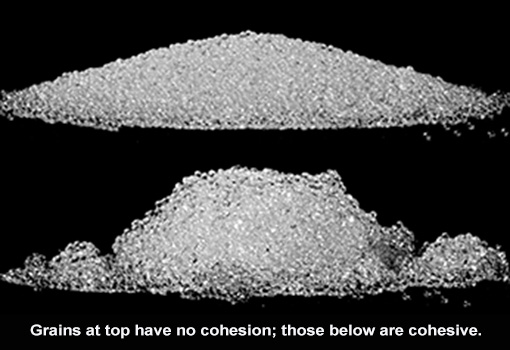 The experiments enabled the team to determine a scaling law for the threshold at which erosion overcomes interparticle cohesion, regardless of the specifics of the system, such as particle size. By quantifying the relationship between these two forces, the research presents a technique that can be used to predict the erosion threshold for different sizes of grains.

The results of this study, says Sauret, can be most directly applied to the process of removing cohesive sediments, such as dust and snow, from surfaces such as solar panels, preferably using a jet of turbulent air in locations where water is scarce. But the work might also give anyone a new perspective the next time they see video of a spacecraft landing on a planetary surface and wonder, just how cohesive is that planet’s surface?